THE MINISTRY of Agriculture and Marine Resources yesterday announced a ban on all processed meat imports from Brazil for the next two months as a precaution following the shocking bribery scandal unfolding in the South American country.


The government of Brazil has suspended exports from 21 meat-processing units due to food inspectors taking bribes to allow sales of rotten and salmonella-tainted meats.

“To safeguard public health and food safety in the Bahamas,” a ministry press statement read, “the Minister for Agriculture and Marine Resources, the Hon V Alfred Gray, has announced a precautionary ban of meat imports from Brazil.

“Until further notice, no permits for the importation of processed meat products from Brazil will be issued. This includes corned beef as well as other beef products and beef by-products.

“The Ministry of Agriculture and Marine Resources will continue to monitor this issue over the next 60 days and should we be satisfied that imports from Brazil be resumed, it would be with the following proviso: beef must be slaughtered and processed at an approved Government abattoir and processing facility; a Sanitary certificate should accompany all imports from Brazil; inspection of all batch containers be done at the Port of Entry; an Import Permit must be sought by all importers from the relevant Government agency; and a registry must be compiled of all importers of beef and beef products from Brazil.”

Barbados – as with the rest of the Caribbean – have inherited a command and punish economic model ...that was meant for controlling ostensibly brainless people ...of whom nothing was expected

WHITHER BARBADOS; THE CARIBBEAN MARCH OF DEBT!

Almost 3 and a half years ago, I wrote in the NATION NEWSPAPER with a heavy heart for Barbados: here is what I said:

“The Minister of Finance for Barbados has issued a comprehensive Short Term Growth & Sustainability programme. It will not work.”

I am constrained to say I TOLD YOU SO!

The difficulty for Barbados – as with the rest of the Caribbean – is that we inherited a command and punish economic model, that was meant for controlling ostensibly brainless people of whom nothing was expected. Our innovation across the region was to add cronyism and the facilitation of lackeys at the expense of our bright young entrepreneurial minds. As such, across the region, we have produced an economic model that is scloretic, for which our politics have become the tribal art of attempting to defend obvious nonsense.

Our people know now that their chance of becoming their best selves and living their best lives is not at home, where – in Barbados as much as anywhere else in the region – successive governments have succeeded in cultivating a caste system, incompatible not only with the moral imperatives of our relevant histories, but also with the yearning, ambition and native genius of our peoples.

Barbados has lead the world in Literacy Rates, but to what purpose?

Bajans regale themselves with their comparative successes in the mark book, but where is the “silicon valley”?

It’s future lies NOT a stale inert economic model that has produced one billionaire and a host of rent-seeking lackeys in 40-odd years.

The crisis is now in the home stretch: Barbados bond yields led a global spike and now ranks with the Republic of Congo; its debt is 135% of GDP; and its reserves have fallen to half a billion; shockingly merely 2.5 months of imports. (They need to cook with steam, for Chrissake!) Whilst it's interest payments are just over $50 million this year, Janet Yellen is likely to raise interest rates again this year. Barbados 2022 maturities have risen 146 basis points since January 20th 2017. Moreover, BREXIT impacts, crony run public institutions and domestic debt are likely to balloon next year.

A similar fate awaits the Bahamas.

HERE IS WHAT TO DO:

Start over. Rescind all oversight commissions!

Appoint My good friend Sir Courtney Blackman and 16 others to a National Steering Committee and manage this crisis for the next 6 months with a maximum of transparency, with the power to subpoena persons and papers for public testimony on all fiscal and economic issues.

Hold National Public Discussion about the current and Future of Barbados; deal with structural issues that limit or prevent Bajans from achieving their best lives in their own country.

End all feckless liberal-minded enterprise projects, which just pay lackeys at the expense of efficiency and true achievement (Compare Singapore, which seeds parastatal corporations and then let’s them sink or swim and if they cannot produce financials they are foreclosed immediately by the Treasury).

Give EVERY Bajan who wants a business license to establish a business aimed at export, licensee fee and tax exemption for 10 years.

Convert all government payments to blockchain using Bitcoin or other electronic alternatives.

Place all government owned infrastructure and land into a sovereign fund, 60% held by Bajan citizens, then JV with a global strategic partner.

Eliminate the Ministry of Tourism.

Convince all CARICOM nations to withdraw from the WTO.

JV with Guyana to fund a super trade highway into Brazil, to provide a staple of Brazilian products to the Caribbean, to compete with Florida.

Establish a 100 acres area as a tax free zone for international data storage and management.

The first options must be to reduce government expenses, and reduce the cost of doing business in Barbados, which has one of every tax in the history of mankind.

Use timing options for initiatives, which allows government to maximize policy options squeezing out efficiencies, then switch to more sustainable programmes. 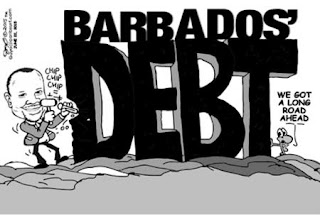 Source
Posted by webcrat at 2:33 PM

AN IMPORTANT DISCUSSION HAS EMERGED SURROUNDING INFLOWS OF FDI IN THE BAHAMAS, lead by our own young prince Professor Peter Blair, moderated by our own Lester R Cox - including bright Bahamian thinkers like Lynden R. Nairn & Hubert Edwards and others. I make this small contribution for which some friends have asked a repost.

"I think there has been some misunderstanding of Foreign Direct Investment (FDI) and some people have misread what Professor Peter Blair has said in his recent presentation.

Of course these are relative & constitutive issues and limiting factors in any comparison; but Papua New Guinea, the Congo, Ethiopia and Turkmenistan enjoy the highest growth rates in the world; but with the exception of Ethiopia, investors are not flocking there.

Yet, neither growth rates nor FDI inflows indicate, NECESSARILY, the actual prosperity which Bahamians have been promised and for which they are waiting.

Let's try a thought experiment: Imagine, say INFOSYS - the Indian tech giant - decided to invest $100 billion in building 50 industrial grade Data Centres in the Bahamas. Suppose they required specialists to build and once built the centres required only 50 people (all foreigners with exotic high tech post graduate qualifications to manage them), with a maintenance crew of 20, including 10 Bahamians. The government would register that as $100 billion in FDI inflows, but its "dead value" and would do nothing to generate the sort of growth that produces PROSPERITY.

There would be no transactional nexus, from which local consumption would be generated no matter how much money it made.

Let's try another thought experiment for the opposite case: Imagine a former Green Beret, expert in coding and information systems & network security, gets with 10 friends, retires to the Bahamas. Imagine that he and his friends teach 300 young Bahamians coding, encryption and mathematical logic on weekends and evenings for 3 years. Imagine that this leads to the development of 50 high tech web security firms and they gain $300 million in electronic security contracts for Banking.

This would not be classified as FDI, but would impact our economic growth rate and power local consumption, generating that prosperity, which Bahamians desire rightly.

What Professor Blair showed was not whether FDI was good or bad or even necessary. HERE IS WHAT HE DEMONSTRATED BRILLIANTLY: a.That our having leaned on FDI inflows in disproportion to development for instance, has resulted in nebulous quantifiable advantages; b. That we have no means of measuring the efficiency of FDI as a driver of growth; and c. Therefore we have been lurching to & fro, using FDI inflows to cover a multitude of sins, operating without a strategy.