Grenada paid for the U.S. defeat in Vietnam

• In what context did the U.S. invasion of Grenada take place
30 years ago? What similarities exist with the current U.S. position?


WHAT could lead the most powerful country in the world to invade a nation of only 110,000 inhabitants? Three decades ago, some 7,000 U.S. marines and parachutists occupied Grenada, in an operation labeled Urgent Fury. The capital of this Caribbean island was bombarded by aircraft, helicopters and warships.


The United Nations condemned the aggression. Ronald Reagan, who occupied the White House at the time, responded, "100 nations in the United Nations have not agreed with us on just about everything that's come before them where we are involved, and it didn't upset my breakfast at all."


This was the same President who when asked about the possibility of invading Nicaragua in 1986 said, " You're looking at an individual that is the last one in the world that would ever want to put American troops into Latin America, because the memory of the Great Colossus of the North is so widespread in Latin America, we'd lose all our friends if we did anything of that kind."


The events of October 1983 took place within the framework of an effort by Reagan, elected in 1981, to reestablish what in the view of neoconservatives was "the needed recovery of the U.S. military's ability to coerce," according to Cuban political scientist and researcher Dr. Carlos Alzugaray.


"In the perception of this group, there existed what they described as a growing danger, evidenced by revolutions in Iran, Nicaragua and Grenada; Cuba's support to struggles in Angola and Ethiopia; the Soviet invasion of Afghanistan; and other international events," the expert told Granma.


"They believed that all of this was due to the weak image projected by the United States after the defeat in Vietnam and the policy they described as pacifist which President Carter had implemented: a canal agreement with Panama, tolerance of the Soviet-Cuban-Nicaraguan support for revolutions in Central America, the Camp David Accords between Israel and Palestine, a pacifist policy in Europe, to give just a few examples." 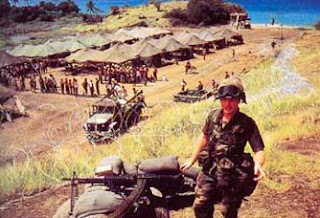 Thus the current debate about the relative loss of power on the part of the United States - exacerbated by developments in Syria - has a precedent in the 1970's. 1979, when Maurice Bishop and his revolutionary New Jewel Movement came to power, was also the year of the Islamic Revolution in Iran and the Sandinista Revolution in Nicaragua. This was compounded by a decade of economic crisis.


The U.S. needed a show of force to make clear that the country still had the resources, and the will, to protect its strategic interests wherever they might be challenged, Alzugaray said.


"The Caribbean Basin was, for many, the perfect site, a location in which the relationship of forces favored the U.S. given the closeness and overwhelming military advantage.


"Both Nicaragua and Grenada were considered vulnerable," Alzugaray continued, "but different strategies were followed in the two countries: a covert war against the first, with support to reactionary regimes in the area, and an open invasion of the latter, once propitious conditions existed."


Grenada's revolutionary process fell victim to internal contradictions. The new government had disarmed the police, created a Popular Assembly with representation and participation by all social layers; began the redistribution of land; supported access to health care and education. More than 2,500 people had learned to read and write by 1981. Nevertheless, one segment of the leadership questioned Bishop's politics and demanded more radical positions. This led to his destitution, arrest and assassination on October 19, 1983. These were the conditions under which the U.S. mounted the invasion.


The most powerful country in the world is today experiencing the erosion of its hegemony. When faced with a similar situation in the past, the U.S reacted by attacking a small country. How might it respond today?


There were and are two possible reactions, then and now, said Ernesto Domínguez, from the University of Havana's Center for Hemispheric and U.S. Studies (CEHSEU), speaking with Granma: "Assume the decline and attempt to manage it in such a way to preserve a privileged position, or try to detain the process by resorting to the use of force, with several concrete objectives, such as giving a show of power, reaffirming geo-strategic positions, controlling key resources or stimulating the economy with military spending."


However, Dr. Domínguez commented that there are important differences between that historical moment and the present. "In the first place, at that time we were still in the middle of the bi-polarism of the Cold War between the United States and the Soviet Union. This added a factor which does not currently exist, one of an identified rival with which to compete, and a relationship of understandable confrontation-equilibrium," the professor asserted.


"At that time the decline was more apparent than real, given that the rival in question was in the process of internal disintegration which was not evident until a few years later, but which was already having serious effects, while the United States was far from this. The movements in Latin America and the Third World in general were strongly connected to the USSR in many ways.


"Currently, the relative decline appears more real, since multi-polarity is an emerging process, albeit with still a long way to go. Latin American movements do not depend on a socialist camp or on a power counterpoised to the United States. The current leftist and revolutionary movements have their roots more openly and solidly established in national and regional realities and contradictions, and they themselves are attempting to construct alternatives of integration," Alzugaray said.
October 31, 2013
Granma.cu
Bahamas Blog International
Posted by webcrat at 6:33 AM