...a masterclass in the art of diplomacy and sheer Alpha Dog swagger by The Hon. Sergey Lavrov - Russian Foreign Minister and The Hon. Rex Tillerson - Secretary of State of the United States of America

If you observed the diplomatic meetings in Moscow today, there was a masterclass in the art of diplomacy and sheer Alpha Dog swagger by The Hon. Sergey Lavrov - Russian Foreign Minister and The Hon. Rex Tillerson - Secretary of State of the United States of America.

First, the "bone of contention" was the hellish situation in Syria; most notably the alleged use of chemical weapons that outraged the selective conscience of President Trump; unmoved previously by 161 uses of chemical weapons. But 162 simply got his goat.

The nexus (where two diplomatic parties cite their disagreement was that Russia had assured the world that it had rid Syria of these weapons. As such, their use meant that either:

a. Russia was incompetent and failed to rid Syria of the weapons, or
b. Syria tricked Russia, or
c. Russia was complicit in Syria's use of these weapons, or
d. It's was all a false flag for Mr Trump to change the subject

Second, the clever student of strategic logic or foreign policy need not come to a conclusion here, but merely master the ability to raise credible questions and present both pre-texts and plausible explanations for each option.

Sean Spicer - the embattled, forever yelling, fidgety - White House press secretary, Rex Tillerson and President Trump all had differing explanations both for the Russian role in Syria; Assad's culpability in the use of chemical weapons and the meaning of US policy in the circumstance; the substance of which is yet to be articulated.

In foreign policy, every move a country makes must either:

I. Support and advance national interests
Ii. Impose, maintain or advance a "balance of power"
III. Confirm or advance a set of values

I defy anyone to show me which of those options have been revealed in US statements or actions.

But today there was indeed an alpha dog Zen master and he was Sergey Lavrov, and by extension Vladimir Putin. Here is what he (they) did today:

a. They blurred the moral lines of US policy by listing off half a dozen examples of US invasions of other nations which ended in disaster.
b. They raise questions concerning the lack of intellectual basis of the US's "trigger happy" military interventions, which seem content to blow things up, but lack the capacity to manage what they insist on bombing.
c. They sowed doubt about US commitments; reminding Europeans of Mr Obama's reticence and Mr Trump's raving mad flourishes concerning NATO.
d. They "took the wind" out of US claims - easing reasonable doubts - about US certainty that chemical weapons were used in Syria; reminding them poignantly about false claims of weapons of mass destruction in Iraq.

Lavrov even showed himself the dominant dog in the room, reminding an American reporter of her manners as Mr Rex Tillerson sat bewilderingly mute like a cafeteria security guard.

In fact, Tillerson's tone changed from chastising Russia, to expressing concern that Syria was being so deceitful as to undermine Russian credibility, which is crucial - in Tillerson's words, to any solution to the crisis.

I do not necessarily agree with Lavrov in any particular. But those of you aspiring to high office, wanting to hold offices requiring a defence of the country - at which we have failed miserably in financial services for instance - Lavrov's approach came from knowing every background fact, understanding and cultivating pre-texts (the most important strategic skill in any public facing endeavour, which we lack in every degree), whilst planting a credible oppositional narrative in the minds of all observers. 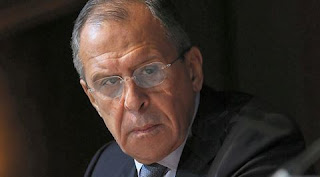