Since 1998, I worked with Pierre Darier directly (as Chairman of Darier Hentsch...now Lombard Odier; and at the Swiss Private Banker’s Association), with a notable Swiss industrialist. My role: to provide the intellectual counter-narrative to the OECD/EU’s wilful demonisation of IFCs; culminating in convincing US Secretary of Treasury, Hon. Paul O’Neill (together with others) to REJECT the OECD’s “Harmful Tax Competition Initiative; which he did did May 2001, and he and I explained the rationale in joint articles in Tax Notes International journal that same month.

In years intervening IFCs have grown punch-drunk from the OECD/EU’s goalpost moving fiats, constantly exempting their members; most notably the US (which has 7 actual tax havens) for the reason (which Prof. Jason Sharman detailed in writing) that the US pays the lion’s share of the OECD’s bill.

Let’s speak plainly: The OECD is NOT an international organisation recognised in international law; the FATF LESS SO. They have no legitimacy to call on sovereign states or constitutional territories.

The EU has acted OUTSIDE the multilateral system issuing fiats of no validity or legitimacy under the Vienna Convention on Treaties 1969.

Reject their Blacklist WITHOUT engagement!

Source
Posted by webcrat at 6:39 AM

Covid 19 will be with us forever

COVID 19 HAS EVOLVED AND NOW CHILDREN ARE DYING IN ITALY!

There are new spikes in cases with children!

COVID 19 WILL BE WITH US FOREVER!

“A pandemic is not about ideas or even medicine. Speculative approaches won’t do: Every habit of hubris, decision-stupidity or presumption ends in tragedy.

A pandemic is about interstitial demographics; dynamics of cascading, data gathering and analytics; exponentiality statistics and avoiding utilitarian triage.

Bubonic plague rose in 1347. We know now it was just the Justinian Plague of the 5th century AD. It killed 50% of known civilisation, wrecked the feudal system and invented the “Job” (yes I mean employment.  So many people died, peasants were able to bargain for compensation).

The pestilence terrorised Europe for 200 years, evolving into the “Black Death”.

Source
Posted by webcrat at 4:42 PM

The Politics of Pandemics

THIS HEADLINE IS FALSE! 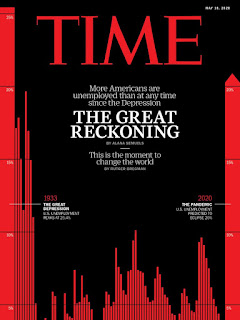 There will be no reckoning: the idea of reckoning is not the arrival of catastrophe.

The calamity is here and deepening absolutely. But this pandemic will not produce any sort of systemic or structural reckoning as a correction for past failures in the political sense.

Governments across the world have adopted an authoritarian stance - from America, to Philippines, to Austria, Italy, Poland and Brazil - in which they assume the citizen-voter’s perspective means nothing!

We ourselves in the Caribbean have known this political authoritarian - know-it-all - stance since independence. Most winning political parties don’t bother about with policy substance, campaigning by merely maligning their opponents.

The Hon. Mia Mottley MP in Barbados - a heroine for her humanity in this Covid 19 era - is potentially the only leader whom citizens voted for rather than against the outgoing administration.

So, there will be no reckoning: governments in the places named will wreck their citizens lives through haphazard policies at a time when 20% of jobs will vanish and 80% of what’s left will pay 50% of pre-Covid 19 wages levels.
There will be no reforms for three cardinal reasons:

1. In crisis cronyocracies seek to protect cronies, not citizens. Lackeys and government form an unimpeachable cabal - as is to be witnessed now in the US - and they claim all must be done to save businesses, premised not on innovation, growth or fair broad prosperity, but rather whatever is needed to maintain chokeholds on their patronised economic sectors!

2. Congenital imaginative laziness: cronyocracies induce creative avoidance and laziness. Ideas have no career in such places.

Our governments in this region will largely await the opening of the US and “wing it” on the hope that there are no explosions in Covid 19 infections.

That is because Cronyocracies cannot respond to crisis in any broad sense. First, because they do not possess or cultivate citizen trust.

Second, because they destory and so lack strategic verve or creative capacity!

3. Citizens who howl at crony government cabals are themselves to blame as well. We have the governments we deserve. Cronyocracies survive because each demented political tribe feeds off of collusive nexus, in hopes of some temporary crumbs from its table of feckless skullduggery!

We are our worst political enemies!

There will be no protests because governments now have the excuse of “Emergency Powers”; which means they can prevent citizens protesting against failures now crippling their lives, even though that failures have been expanding for decades.

This is how pandemics work politically!

Country defaults and company bankruptcies will cascade. Governments will never blame their cranial sclerosis for the carnage; even as they ignore, wilfully, basic sound policy options in preference for reactionary decisions that protect their lackeys...as we are now discovering with Trump and Boris Johnson in the UK!

They will have at the ready - galloping nonsense - excuses, stating the obvious that this - pandemic - has never happened before; despite the fact that the majority of their citizens have been living in Covid 19 conditions for decades.

For companies the only margins available will be those which digitisation brings...but that means not only 20% fewer jobs globally, it means at a time when nations have seen their incomes vanish, the social-safety-net/public assistance will face unprecedented demands.

Cannibals in the Church of the Bahamas

Are Cannibals in the Church of the Bahamas?

During the 40s and 50s a reporter asked Mahatma Ghandhi his view on Christianity. He responded, I know of Jesus, but Christians are so unlike Jesus Christ!

Right he is. It seems, the Bible and Jesus as the head of church is inappropriate with all of its examples for us to learn from and follow; is no longer the golden standard for Christian stewardship!

Let’s faced it. Of the more than 9 billion people who have lived and living on earth, not one of us were perfect and without flaws! Not Noah, Abraham, Moses, Job, Daniel Peter and Paul! Jesus Christ is our example!

If we modeled our lives after Mortals, we will most certainly not accomplish our primary goal, of entering His Kingdom!

So why are contemporary Christians cannibalizing each other in Satan’s Arena?

They never used Fleshly works to attack a brother! Cuz they realized we are all mortal corruptible beings!

Naturally Jesus Christ is the Only exception!

What we have seen on social media with one person claiming to be God’s Oracle viciously attacking the well loved Singing Bishop in a setting chaired by Satan himself, is the most outrageous attack I have ever seen one mortal Inflicted on another! To God be the Glory.

Source
Posted by webcrat at 7:13 AM