THIS AIN’T YOUR DADDY’s INFLATION! 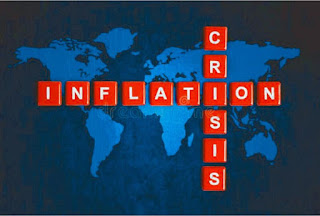 Nothing done by the Central Banks of the world, will cauterise the current inflation momentum, which is not nation centric, but global!
This last clause - about the global character of this inflationary flourish - is telling: the Central Banks seem willfully ignorant of this global scale, each applying domestic tools as if shoveling water in a strainer will at least appear to be effective.
It is galloping nonsense of the first water!
In the US, the Federal Reserve’s role is to police “headline inflation” usually the effects of the money system, the cost and value of credit, driven by the money supply.
The problem is this inflationary moment is not American, (it’s global as I said) and worse, the US Federal Reserve had a hand in distorting the money system, so much so, as to render itself and it’s tools irrelevant to the scope and scale of the problem: over the last 13 years, “Quantitative Easing” - basically printing money to inject into banks - has lead to a situation that 40% of all US dollars in circulation were printed less than 3 years ago.
The basic law of supply and demand suggests that such a phenomenon alone is inflationary.
This Quantitative Easing together with interest rates at zero destroyed traditional lending that drives growth in an economy.
Where did all those trillions of dollars end up?
In the hands of the wealthiest 1% of the population, and in large corporations whose boards initiated the largest stock buybacks in American history; rendering the securities markets a fever unto themselves; a most morally vulgar undemocratic feature of Anglo-American capitalism.
This exacerbated the wealth and income gap on its own: and COVID 19 and the impacts of economic expansion away from the traditional economy to digital platforms - like Amazon, ZOOM etc. - foolish, ill-thought out stimulus packages, work-from-home initiatives, automation and permanent labour replacement and the normal economic incentives of the marketplace have been distorted beyond recognition.
Notably, the same employees who want to remain at home, also want liquid retirement packages when the time comes. However, their 401k and retirement funds are invested in office buildings. These office buildings now empty or leases collapsed, companies go bankrupt with losses to their own retirement funds in a vicious cycle.
But these are side notes: the real problem are two:
1. The abject stupidity of shutting down the entire world in 2020, destroying global supply chains and the delicate global informal labour markets that supported it; which will never be repaired.
This is the baseline driver of price appreciation and not the money system; which as I said above has induced economic and social disequilibrium.
If one listened to the Chairman of the US Federal Reserve yesterday, he has essentially defaulted to chasing the energy markets where the Fed has zero impact. His problem is market sentiment is ahead of Fed actions in determining overall economic sentiment.
2. The war in Ukraine - which is the fault of the West - though Putin is responsible. The war, together with the COVID 19 induced supply chain crunch has driven up fuel prices and so energy costs, which means energy inputs to every aspect of modern life has been impacted …and at the same time, lack of capacity (from the stupid shutdown) means the energy induce price together with the supply induced pricing has sent prices spiraling upwards.
Now this has begun to impact product availability and consumer sentiment. Tesla raised prices three times this year alone.
Even if countries turned toward development, availability and delivery of supply suffers from both energy input costs and lack of supply scale.
In 2020, I called for a $4.5 trillion dollar global reset “stimulus”, paid in Special Drawing Rights (SDR) to avoid inflationary US dollars, tied to meeting some sustainability criteria. (“Credit Guidance toward purloined outcomes as my brother Craig Shelton advises so often). Of course this was not done. There was no global leadership on resetting the mommy world’s economy after the reopening from the shutdowns. This was barking madness; given the impact of COVID and the impacts of the Federal Reserve’s quantitative easing, incoming automation and the economic and financial pressures on households globally.
Now, the US/NATO in stoking Putin into this conflict in Ukraine; they have ignored all the basic economic calculations of this conflict.
Tunisia is about to starve to death for Russian/Ukrainian wheat. I’ve said again and again…hold all parties to the conflict accountable, but make deals to offset the effects of the conflict. Instead, the West - the world’s chief warmongerers - wasted time demonising Putin for doing what the West has done 120 times in the 20th century alone, rather than making critical deals as Kissinger, Professor Mearsheimer and myself have argued.
Worse, the incompetence of the West is shown not only in the near destruction of Ukraine, but also in the new strategic alignments that are stronger than the West, including Russia, China, India, much of Africa and South America or nearly 60% of the world’s population.
Additionally, at the same time that 40% of all US dollars in existence were printed in the last three years, the West’s hubris has led to the strongest Ruble in its history and a Ruble/Rupee exchange rate trading away from US dollar reserves.
For the Caribbean, we are suffering already: we will find it hard to build a bird’s nest because of supply chain issues. Our purchasing power will be routed by imported and implicit inflation. And the heat of the coming summer will cause unforeseen suffering and infrastructural collapses with no relief in energy prices…because we did not use the pandemic to shift our capacities toward alternative energy.

For those delusionists touting crypto as a hedge: Learn to read facts: crypto is not a hedge. It’s a proxy and has been in synchronisation with traditional assets for 17 months now!