By promptly integrating migrants, the economies of host countries stand to increase their GDP by as much as 4.5 percentage points by 2030 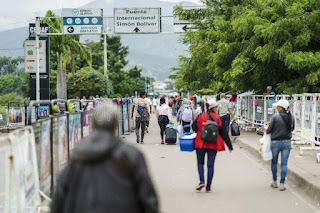 More than 7 million Venezuelans have fled the country since 2015, with 6 million settling in other Latin American countries.  The region’s largest migration episode in history is driven by the collapse of the country’s economy, which has left Venezuelans struggling to meet their basic needs.

Between 2013 and 2021, Venezuela’s gross domestic product is estimated to have declined by more than 75 percent, the most for a country not at war in the last 50 years.  The COVID-19 pandemic compounded the country’s economic and humanitarian crisis, and in 2020 more than 95 percent of Venezuelans were living below the poverty line.

The arrival of Venezuelans seeking better lives has strained the economies—and societies—of Latin American host countries that are already balancing tight budgets, especially since the pandemic.

Colombia, which has received the most Venezuelan migrants, estimated spending about $600 per migrant in 2019.  This covered humanitarian aid, healthcare, childcare, education, housing, and job-search support.  With more than 2 million arrivals, this translates into $1.3 billion in assistance.  In 2019, this cost peaked at 0.5 percent of Colombia’s GDP.

In the long term, however, this investment has the potential to increase GDP in host countries by up to 4.5 percentage points by 2030, as we find in our latest research on the spillovers from Venezuela’s migration.

To reap the benefits from migration, host countries need to integrate the new arrivals into the formal labor force—and society—by promptly offering them work permits and access to education and healthcare.

After a brief interruption during the pandemic, when many countries closed their borders, migration from Venezuela has resumed and is expected to continue in the coming years, although at a slower pace.

We estimate that Venezuelan migrants will number around 8.4 million by 2025—more than 25 percent of the country’s population in 2015.

Overall, the demographic profile of Venezuela’s migrants is like that of the local population in host countries.  Almost two-thirds are of working age and almost half are female.

Most have settled in other Latin American countries, while some have migrated to North America and Europe, mainly the US and Spain.

While Colombia remains the main destination, Chile, Ecuador, and Peru have also received sizable flows, with their combined number of migrants exceeding 2 million, more than 3 percent of the local population on average.

Our research finds that Venezuelan migrants—many of them more educated than the local populations—face higher unemployment, are more likely to initially work in the informal sector, and earn less than the local workers.

We didn’t find evidence that migrants are displacing domestic workers, although we have seen downward pressure on wages in the informal sector.

The wage gap between domestic and migrant workers grows with the level of education, which suggests a misallocation of human capital—workers’ skills, knowledge, and expertise—as educated migrants tend to only find unskilled jobs.  On average, domestic workers earn about 30 percent more than migrants.

Our analysis finds that providing migrants with humanitarian assistance and access to public services carries a sizable fiscal cost and puts pressure on the budgets of host countries, as the Colombia example shows.

But the analysis also identifies large medium-term gains in productivity and growth resulting from an increase in the labor force and better alignment of migrants’ human capital with jobs.  These gains are greater for countries that receive larger and more educated migrant flows relative to the domestic population.

We estimate that, with the right support and integration policies, migration from Venezuela has the potential to increase real GDP in Peru, Colombia, Ecuador, and Chile by 2.5 to 4.5 percentage points relative to a no-migration baseline by 2030.

We also project that the cost of integrating migrants would narrow over time as migrants join the labor force, increasing economic activity and expanding the tax base.

Early in the migration crisis, countries in Latin America welcomed Venezuelan migrants and provided support in the form of visa waivers, mobility cards, and access to humanitarian assistance, healthcare, education, and childcare.  Migrants also received work permits and credentials to help them integrate into the labor market.

However, in 2018 and 2019, we saw a shift in policies as migration flows intensified.  While some countries introduced new programs to facilitate the integration of migrants, others made it harder for Venezuelans to enter by requiring additional documentation.

Countries should continue supporting migrants and helping them integrate into the formal sector so they can find jobs that are in line with their human capital and increase productivity in the economy.

This will require improving transitional arrangements and asylum systems, bringing in migrants into the health and education systems, and formalizing migrant workers by giving them work permits and accelerating the accreditation of skills and education.

To cover the costs of implementing these policies, countries should seek help from donors and international institutions.  The IMF is analyzing the impact of migration and coordinating with the United Nations High Commissioner for Refugees and other relevant agencies to help countries access funding sources.

Countries in the region should also agree on a coordinated response to the migration crisis, in which each one contributes its fair share to the support and integration of migrants.