Anti-Cuban maneuver in the Organization of American States (OAS) defeated

...the OAS - an organization with no moral authority and a long history of betraying the peoples of Latin America 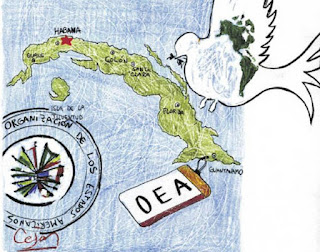 A call for a meeting made by the United States to the Organization of American States (OAS) to "analyze the situation in Cuba," no doubt to justify interference, failed miserably due to the refusal of the majority of its member countries.

Party Political Bureau member and Cuban Minister of Foreign Affairs Bruno Rodríguez Parrilla posted a tweet yesterday, July 28, describing the events as a defeat for the U.S. within the pro-imperialist entity.

"Anti-Cuban maneuver in the OAS defeated. Rejection by a majority of member states forced suspension of a Permanent Council meeting," the Foreign Minister stated, adding that the President pro tempore of the Council admitted the failure through a "pathetic letter insulting Cuba."

According to a report by Russia Today, Washington Abdala, president pro tempore of the Permanent Council, reported that, after receiving statements from several countries, it was decided to postpone the meeting to conduct consultations that could be useful.

Abdala added that he has asked the organization's Secretariat for Legal Affairs to prepare a report on the situation in Cuba in relation to the OAS - an organization with no moral authority and a long history of betraying the peoples of Latin America. He said the document will be shared with OAS members when it is available.